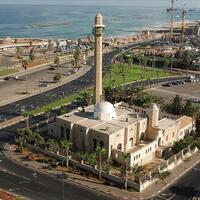 A mosque built near present-day Tel Aviv in the last years of the Ottoman Empire continues to stand firm despite years of tension and conflict in the region.

The Hassan Beg Mosque in the Jaffa settlement, built by the governor of the empire Hassan al-Basri al-Jabi in 1914, has survived the test of time in its architectural beauty even though it has been attacked many times since the establishment of Israel.

The State of Israel, established in 1948 on a large part of historic Palestinian lands, included the Old City of Jaffa under the local administrative management of Tel Aviv and the mosque’s doors were closed to Muslims.

After being cut off from its Muslim surroundings with hostels and entertainment venues later built around the mosque, it was reopened for worship in the late 1970s by the Muslim community of Jaffa.

In a conversation with the government agency Anadolu, the imam of the Hassan Beg Mosque, Sheikh Ahmad Abu Ajawa did not hesitate to praise the architectural features of the mosque, which is over 100 years old.

“The Hassan Beg Mosque is really an Ottoman masterpiece. Anyone who looks at the structure of the mosque, from the entrance to the pulpit and the sword, will see that it is a huge Ottoman work,” the imam said.

He noted that the mosque has a prayer area for nearly 3,000 people.

“However, all the Palestinians, especially the residents of occupied Jerusalem, and our brothers and sisters in Turkey gave full support to this mosque,” he added.

The Mirasımız Association (Our Heritage) of Turkey, which works to preserve the Ottoman heritage in Jerusalem and the surrounding areas, restored the eastern and northeastern facade of the mosque and restored the southeastern wall of the mosque in accordance with Ottoman architecture in 2009.