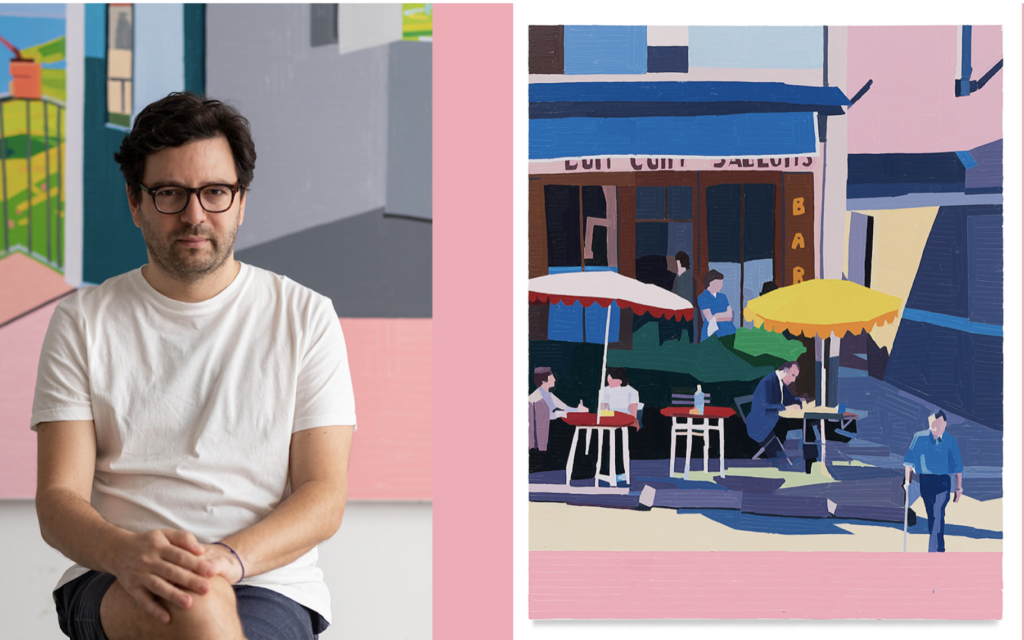 New York’s Jewish Week via JTA – On his recent trip to New York, Israeli artist Guy Yanai felt the city is the most aggressive it has ever been in the 20 years he has visited, since studying art at the Parsons School of Design there. . He forgot how big the cars were, how fast they were driving, how loud their music was.

“Returning to Tel Aviv felt like visiting a Swiss village,” he said. “There’s no respite in New York. I forgot about it.”

Yanai was in New York to open “Things of Life,” his second solo exhibition at Miles McNeary Gallery On W. 22nd St. At Chelsea. The 20 paintings in the exhibition, which runs until November 27, are bright, colorful and deceptively simple snapshots: a couple hugging in front of their car, sailing boats on the water, a man writing a letter in front of a cafe.

The paintings “speak of moments of heartbreak and tragedy, but also of unbridled intimacy, and evoke a longing for what may have been lost during the few months of quarantine,” Trans Troy writes in the article accompanying the exhibition.

The show is inspired by the film with which she shares her name, “Les Choses de la Vie” by Claude Sota (1970), which follows a man on the last day of his life. He is debating whether to end things with his mistress or leave his wife, and visits his son and father before (spoiler alert) gets into a car accident and dies.

Maybe that’s why Linai has big, fast cars in mind.

“I really resonated with this man,” Yanai said. “This is the last day of his life, and we see him visiting his beloved, his wife, his father, his son and his workplace. Everything pulls him in different directions, all the demands of his life.”

Many of the drawings in the show are reconstructions of still images from the film. They capture the power and beauty of the simple acts that create life and can disappear so quickly.

“I like the title ‘Things of Life,'” Yanai said. “As I get older, the day-to-day life becomes harder. I don’t know how people draw the big issues in their work. I can’t even move beyond breakfast.”

Yanai, 44, recently opened a studio in Marseille, France, away from his wife. For the first time, most of his work for the exhibition was painted in France, instead of in his home studio in Tel Aviv.

“The program felt very French to me, in the end. It bothers me a bit,” he said.

Yanai is resistant to contact with any particular area. Not France, not Sicily – where he goes on holiday every August – and not Israel, where he lives and works mostly. He does not want to be labeled an Israeli artist, or even a Jew, even though he defines himself as “a very proud Israeli and a very proud Jew.” Being called an “Israeli” artist or a “French artist,” he explained, “is like putting a certain spice on a dish and then it becomes the only thing you taste.”

Haifa-born Yanai moved with his family to the suburbs of Boston when he was seven. He attended Parsons School of Design, The New York Studio School, Pont-Aven School of Art and Hampshire College, where he completed his BFA in 2000. Yanai has presented two dozen solo exhibitions, and his works have appeared in many group exhibitions around the world.

“Chronicles” marks the first time that Yanai presents paintings that put the human figures at the top and center; His previous performances feature plants and landscapes.

During COVID’s first lock, he felt a massive change in what he was doing with his art.

“For the first two weeks I thought the art was over. I sat in bed and did not paint. I felt like ‘this is it, there is no more art,'” he explained. But it was these thoughts that allowed him more freedom to draw whatever he wanted, even if it felt irrelevant or imperfect. At first Yanai drew screenshots of zoom calls and online lectures. “I did not even understand what I was doing until then,” he said. “And I do not know if I can do it again.”

Fighting the plague, for Yanai, means embracing the idea of ​​his artistic freedom. “I came to art for a reason, to do what I want. Freedom to create what you want, to challenge yourself and go to different places.” The films he watched during the lock reminded him of this, and let him explore more figurative, narrative, and emotional portraits.

Yanai, who has upcoming exhibitions in Berlin and Tokyo, hopes his next project will be equally liberating. “I want to draw what I want, everything I have an emotional response to. I look around at things that give me a response or a deep emotional response, and that’s what I draw.”