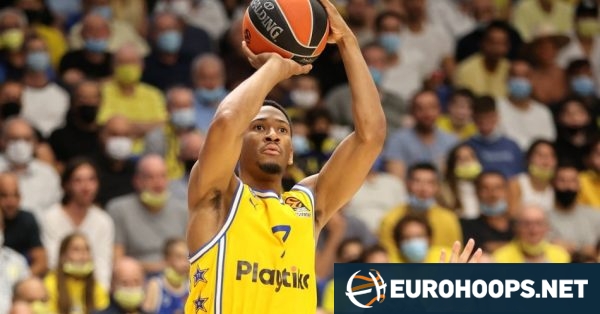 Taylor, 27, joined the Turkish Airlines EuroLeague outlet last July. He has since produced 2.7 points, 1.7 rebounds, and 0.8 assists per game over 19 EuroLeague appearances, including seven starts under head coach Giannis Sfairopoulos. At the domestic level, he averaged 5.1 points, 4.1 rebounds, 1.0 assists, and 0.6 steals per Winner League contest.

Before landing in Tel Aviv, the former NCAA Division II swingman with Seton Hill University displayed his talents in Germany and Hungary. His previous experience in the Old Continent featured 12 games played in the Basketball Champions League as a member of Brose Bamberg. He had 9.5 points, 3.8 rebounds, 2.3 assists, and 0.9 steals per game until the German club was eliminated with a 7-7 record in the 2019-20 Regular Season.

Back in FIBA’s premier European club competition, he meets Strasbourg in the Round of 16. The French team finished second in Group F of the Regular Season and swept PAOK mateco in the best-of-three Play-In series to join Group L of the Round of 16. Regular Season group winners Falco Szombathely and Rytas Vilnius along with fellow Play-In qualifying side Lenovo Tenerife are the teams to beat for one of two group spots leading to the Quarterfinals.

Domestically, Lassi Tuovi’s side currently ranks sixth in France’s Betclic Elite LNB Pro A behind a 9-6 WL record, three and a half wins behind leader Boulogne Metropolitans 92.